The various ambiences of the Park are easily accessible with numerous public roads and routes that cross farming land (wet-zones and farming areas between the forest and the promontory), footpaths (on the promontory and on the island of Zannone), gravelled cycling and walking signposted paths (in the forest), some of which present illustrated signboards (such as the signposted path at the Park visitor’s centre, the path of Remembrance at Cocuzza and the naturalistic path at Villa Fogliano botanical garden) and equipped accesses (dunes). The Park is also extremely accessible to disabled people. 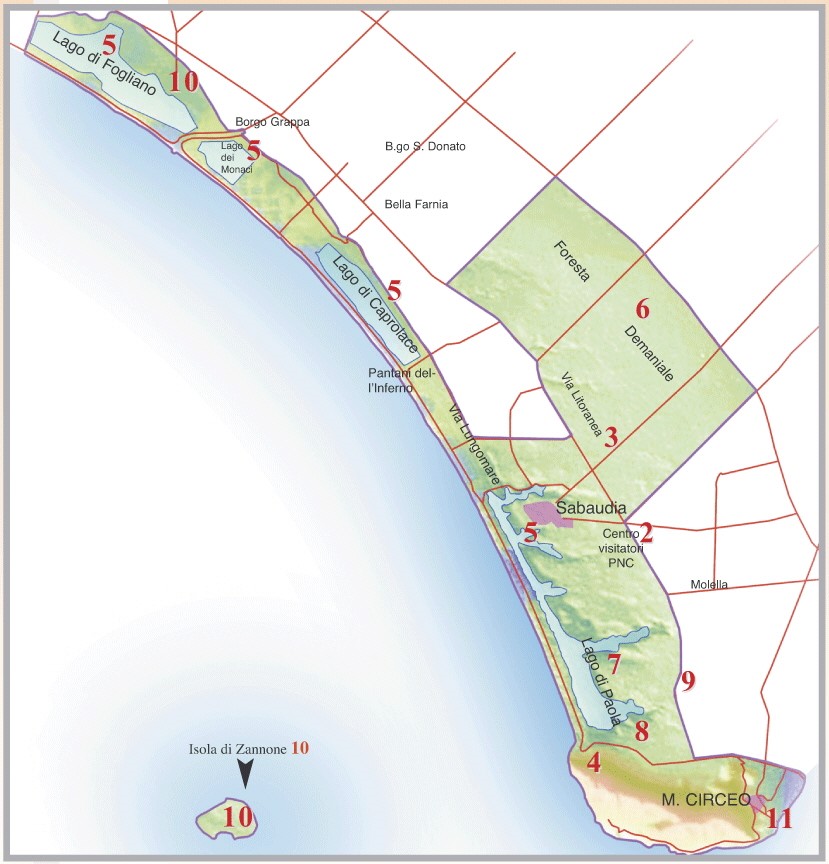 From The Circeo National Park visitor centre, one can pursue a signposted and detailed path to the reconstructed site of Lestra (pre-reclamation habitations) and a Carbonaia (charcoal burners, where charcoal was produced) Midway through your route (at ref. Point 21) you will reach Paola’s Lake. Peculiar, here, is the morphology of the soil, mainly sandy from the ancient dunes which characterized the coastal landscape of the Pontine plain. You can also reach the lake via a cycle track. A natural history museum is located at the visitor centre; inside, all the ambiences and historical sites that typify the Park are represented in a precise reconstruction.

The documents gathered in this centre witness the work of those who strived tirelessly to ensure that the population of the Pontine Plain had the right to receive a basic medical service and an education. The present edifice, built in 1927, came to replace the school hut used by those people who yearly (from October until June) inhabited the forest at Lestra Cocuzza. The centre, restored in 1994, is divided into sections dedicated to the first teachers and doctors, and to the fight against malaria. Along the short path to the building, named the Path of Remembrance, signboards illustrate the history of the territory from Neanderthal man until the present day.

Running along the coastal road, and having reached Torre Paola, you come upon a levelled ground road-mender by the bridge of the Roman port-canal (whose banking in “opus incertum” is still visible). Subsequently further along the “Viottolo della Regina” arriving at the service area “Peretto” (above the centre of S. Felice Circeo) or a footpath emerges to your right (market by red signals); it ascends to the peak of Circe (541 metres), achieved only after a two hours long climb through a luxurious Mediterranean forest of evergreen oaks.
On the top, Mediterranean maquis partly obscure the remains that formed the temple dedicated to Circe, and particularly, at its summit, an open pagan altar. The view here is breathtaking: on clear days, it covers the entire Pontine Plain (the forest, the coastal lakes, the Colli Albani up to Torre Astura, the chains of the Lepini, Ausoni and Aurunci mountains; the Plain of Fondi and the isles of the Pontine Arcipelago).

The four coastal lakes of the Circeo National Park (Paola or Sabaudia, Caprolace, Monaci and Fogliano) are set in an unique and spectacular landscape, right between the dunes and the plain.
They form one of the most interesting environments in the all of the Mediterranean. In fact, all the lakes have been recognized as “wet zones of international importance” by the Ramsar Convention. In both spring and autumn, numerous species of birds visit the area during their lengthy migrations. This habitat is a real heaven for bird–watchers, the best sites being Pantani d’Inferno/ Lake Caprolace and Pantani S. Andrea/Strada Diversivo Nocchia.

From Cerasella, set inside the only remaining and biggest plain forest in Italy, one may walk or cycle down to a large, gravelled path.
Only after about 1500 meters, on your left, there is a small wooden bridge over a canal leading to the Piscina della Verdesca. Here, the ground forms a depression where, in winter and spring, rain water collects and recreates the images of what, for centuries, was the characteristic landscape of this area.
It is one of the last remaining and richest ecosystems in Italy, which support hygrophilous and mesophyte plants, various kinds of frog, newts, turtles and water snakes, and numerous types of insects.
Owing to its enormous biological value UNESCO has included the forest of the Circeo National Park in the international network of biosphere reserves with its M.A.B. (Man and Biosphere) program.

Set in the core of a natural reserve (Rovine di Circe) in a luxurious Mediterranean strip of forest on the shores of Paola’s Lake, this is one of the most interesting archaeological complexities of Low Lazio.
Villa Domiziano dates back to the I century a.C. and extends on an area of over 45 hectares; very interesting is the thermal spa, the enormous water tanks and the bathing area.

On the shores of Paola’s Lake, on a small peninsula at the entrance to the Bagnara branch, are the remains of a small medieval convent. It was built on a Roman Villa dating back to the I century a.C., whose thermal spa is still visible.

This ancient spring, widely known since Roman times, owes its name to the patrician Lucullo.
It was he who financed the work of obtaining water from the source. He had two fountains constructed, the main one of which supplied water drunk for its purifying properties.
Water from the other fountain contained more iron and was therefore used to fill the thermal spa. The spring was rediscovered in 1904, under 15 meters of sand, and, even today, it still gushes from the pipes set inside a vaulted roofed roman edifice.

Villa Fogliano is set in the evocative and ancient Caetani botanical garden (visible through guided tours), on the shores of Fogliano’s Lake; Zannone island with its still integral habitat, where moufflons (wild mountain sheep) freely move among ancient remains and paths through forests of cork trees and ilex, terminates in a sheer drop to the sea.

This is a widely known cavern where, in 1939, a skull of a Neanderthal man was discovered. It is situated in the territory of San Felice Circeo, where you can also visit the Grotta delle Capre.